The Glory that was Greece; the Grandeur that was Rome 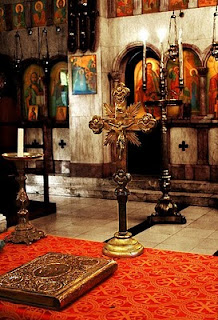 About The Man Behind the Curtain

Welcome to "What Sister Never Knew and Father Never Told You." I have always had a passion for history, and Church History (or, as it is better termed "The History of the Church") and in this blog I hope to bring up interesting--and frequently deliberately overlooked--facets of the history of the Catholic Church. I will probably also dip into the history of other Christian Churches from time to time and even that of non-Christian religions, but I do hope to keep my focus on the History of the Catholic Church. I am particularly anxious to show that the Catholic faith--which while doctrine tells us "comes from the Apostles" (and presumably to them from Jesus) is in fact, like all historical institutions, an evolutionary phenomenon. There is a huge difference between Tradition and traditions,. What many "Traditionalists" are caught up with today is not Tradition at all but various minor customs of human origin and little or no theological significance. As a Catholic myself, I am anxious to separate the wheat of the Gospel from the chaff of religiosity.

I am a life-long Catholic and a professional historian (M.A., Ph.D) who also has a Master's in Theology. My grade school (Sisters of Mercy), high-school (Society of Jesus), and undergrad university (Society of Jesus) education is all in official Catholic, Kennedy Directory listed, educational Institutions as is the Grad School where I earned my Theology Degree. My History Degrees, Master's and Doctorate, are from a private East Coast University (where Jews teach Christianity to atheists) that ranks in the top one-hundred American Colleges and Universities lists. I chose a secular campus for my history work precisely so that I could not be accused of having done an "in-house" educational program. As it worked out I had one Catholic professor for one course and that course was "The History of Islam." I currenlty teach on a graduate faculty and specialize in medieval spirituality (of which I am not only a professor but a practioner) and in History of the American Church. I have also been invited around the English Speaking World to give classes and workshops--England, Ireland, Australia, Kenya, Zimbabwe, India, and Texas (among other places). I have spoken at conferences in Rome, Sao Paulo, Nantes, Krakow and other non-Anglophone locations in Europe and the Americas. I have done lecture tours on a prominent cruise line commeting on European History and the various ports of call--a great job if you can get it. In other words, I am not an amateur at this.

I am thoroughly committed to the program of the SecondVatican Council as it was promulgated in 1965 (as contrasted with how it has been reinterpreted, in some cases almost out of existence) by both self-appointed and divinely anointed authorities over the last thirty-some years. As I get older I realize that the Council is an opportunity for us Catholics to embrace the Gospel as the guiding light of our lives and is too great an opportunity to be bypassed by those who are anxious to see a revival of the juridicism, triumphalism, and clericalism decried by Bishop Emil de Smedt in the opening session of the Council. There are those "fleshpots of Egypt Catholics" who want to retreat to the slavery of pre-conciliar American Catholicism," but as for me, I still believe that John XXIII (and Pius XII before him and Paul VI after him) saw a promised land of a mature and evangelical Catholicism so needed in the 21st century and I for one embrace the future, not the past.

By the way, historians are those who embrace the future and realized that the past is there to guide us toward it. Those who embrace the past and seek to restore it are antiquarians. Christians know that we stand facing the future for that is from where the Kingdom of God calls us. Those who prefer restoring the past have not yet heard that call. Or, as one spiritual director once told me: "If God had wanted you to live in the 13th century (or the 18th, or the first half of the twentieth) he would have put you there. He put you in the present facing the future. That is where your vocation is."