Reason 7 Why the New Mass beats our the Old Rite

Posted by Consolamini at 3:16 PM No comments:

Allah God ???? One and the Same or Different Deities 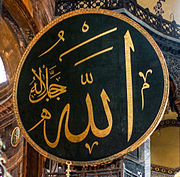 Sound and Light, Sound and Fury

Son et lumière shows with stories and their images being projected on historic buildings have been increasingly popular in Europe over the last forty years.  The Palace of Versailles, the Cathedral of Notre Dame in Paris, the Hôtel de Ville in Brussels, the Schönbrunn Palace in Vienna, the Parthenon in Athens, the Great Pyramid in Giza have all served as the screen for the sound and light displays.  Last week, on December 8th—the feast of the Immaculate Conception—Saint Peter’s Basilica in the Vatican joined the list as Fiat Lux, Illuminating our Common Home, an hour-long sound and light display highlighting the challenges of Climate Change was projected on Carlo Maderno’s 17th century façade.  Images of seals, clownfish, dolphins, lions, monkeys, coral reefs, exotic birds and countless people from around the world were projected on the Basilica.
It is no secret that Pope Francis is one of the world’s leading voices calling for environmental reforms to protect our planet from the effects of human-generated threats to the atmosphere, seas, rivers and land.  The Pope wrote his first encyclical, Laudato Si, outlining a Christian response to environmental threats.  The Encyclical set off a vehement reaction from the Katholik Krazies and last week’s son et lumière raised the pitch of hysteria.   It is becoming clear that Pope Francis is proving an irritant to a significant party within the Church that becoming more and more rebellious to his authority.  Even such once reputable sites as Rorate Caeli and Father Z’s What Does the Prayer Really Say?  are advocating open rebellion against the current Vicar of Christ.
This is not a problem of Francis’ making but rather due to the poor catechesis given Catholics in the years before the Council when so many of our schools and catechisms were given to a monophystism  that rejected the true humanity of Christ, giving us instead a Deity who ruled over creation but never truly entered into it.  This was reflected in our liturgy which, at the time, was totally separated from the realities of everyday life.  I was pondering this point this morning as I watched people gather for Mass and quietly greet one another as they took their places in Church.  We had always been taught that our attention should be directed solely towards the Christ present in the tabernacle.  There was no appreciation of Christ present in his mystical Body, the Church.  Everything was over-spiritualized and other-worldly.  This world did not matter at all.  The implications of the Incarnation on our daily lives were totally overlooked.
Those who oppose Pope Francis on issues of climate change do so not for theological reasons but for political-economic ones.  They uncritically buy into the economic systems that are irresponsibly exploiting our natural resources and destroying the environment in favor of short-term gain over long-term human good.  But they justify this by their gnostic separation of the material and spiritual worlds.  The Incarnation teaches us that this created world has been sanctified by God becoming part of it in Christ Jesus.  The orthodox Christian knows that we cannot divide the sacred from the profane—that creation is now shot-through with the God who is its origin and its destiny.  Perhaps Gerard Manley Hopkins put it best

The world is charged with the grandeur of God.
It will flame out, like shining from shook foil;
It gathers to a greatness, like the ooze of oil Crushed.
Why do men then now not reck his rod?
Generations have trod, have trod, have trod;
And all is seared with trade; Bleared, smeared with toil;
And wears man's smudge and shares man's smell:
the soil Is bare now, nor can foot feel, being shod.

And for all this, nature is never spent;
There lives the dearest freshness deep down things;
And though the last lights off the black West went
Oh, morning, at the brown brink eastward, springs —
Because the Holy Ghost over the bent
World broods with warm breast and with ah! bright wings.

oh, but I forgot, Hopkins was a Jesuit.  We can hardly look to him for orthodox Catholicism!
Posted by Consolamini at 8:37 AM 3 comments:

About The Man Behind the Curtain

Welcome to "What Sister Never Knew and Father Never Told You." I have always had a passion for history, and Church History (or, as it is better termed "The History of the Church") and in this blog I hope to bring up interesting--and frequently deliberately overlooked--facets of the history of the Catholic Church. I will probably also dip into the history of other Christian Churches from time to time and even that of non-Christian religions, but I do hope to keep my focus on the History of the Catholic Church. I am particularly anxious to show that the Catholic faith--which while doctrine tells us "comes from the Apostles" (and presumably to them from Jesus) is in fact, like all historical institutions, an evolutionary phenomenon. There is a huge difference between Tradition and traditions,. What many "Traditionalists" are caught up with today is not Tradition at all but various minor customs of human origin and little or no theological significance. As a Catholic myself, I am anxious to separate the wheat of the Gospel from the chaff of religiosity.

I am a life-long Catholic and a professional historian (M.A., Ph.D) who also has a Master's in Theology. My grade school (Sisters of Mercy), high-school (Society of Jesus), and undergrad university (Society of Jesus) education is all in official Catholic, Kennedy Directory listed, educational Institutions as is the Grad School where I earned my Theology Degree. My History Degrees, Master's and Doctorate, are from a private East Coast University (where Jews teach Christianity to atheists) that ranks in the top one-hundred American Colleges and Universities lists. I chose a secular campus for my history work precisely so that I could not be accused of having done an "in-house" educational program. As it worked out I had one Catholic professor for one course and that course was "The History of Islam." I currenlty teach on a graduate faculty and specialize in medieval spirituality (of which I am not only a professor but a practioner) and in History of the American Church. I have also been invited around the English Speaking World to give classes and workshops--England, Ireland, Australia, Kenya, Zimbabwe, India, and Texas (among other places). I have spoken at conferences in Rome, Sao Paulo, Nantes, Krakow and other non-Anglophone locations in Europe and the Americas. I have done lecture tours on a prominent cruise line commeting on European History and the various ports of call--a great job if you can get it. In other words, I am not an amateur at this.

I am thoroughly committed to the program of the SecondVatican Council as it was promulgated in 1965 (as contrasted with how it has been reinterpreted, in some cases almost out of existence) by both self-appointed and divinely anointed authorities over the last thirty-some years. As I get older I realize that the Council is an opportunity for us Catholics to embrace the Gospel as the guiding light of our lives and is too great an opportunity to be bypassed by those who are anxious to see a revival of the juridicism, triumphalism, and clericalism decried by Bishop Emil de Smedt in the opening session of the Council. There are those "fleshpots of Egypt Catholics" who want to retreat to the slavery of pre-conciliar American Catholicism," but as for me, I still believe that John XXIII (and Pius XII before him and Paul VI after him) saw a promised land of a mature and evangelical Catholicism so needed in the 21st century and I for one embrace the future, not the past.

By the way, historians are those who embrace the future and realized that the past is there to guide us toward it. Those who embrace the past and seek to restore it are antiquarians. Christians know that we stand facing the future for that is from where the Kingdom of God calls us. Those who prefer restoring the past have not yet heard that call. Or, as one spiritual director once told me: "If God had wanted you to live in the 13th century (or the 18th, or the first half of the twentieth) he would have put you there. He put you in the present facing the future. That is where your vocation is."